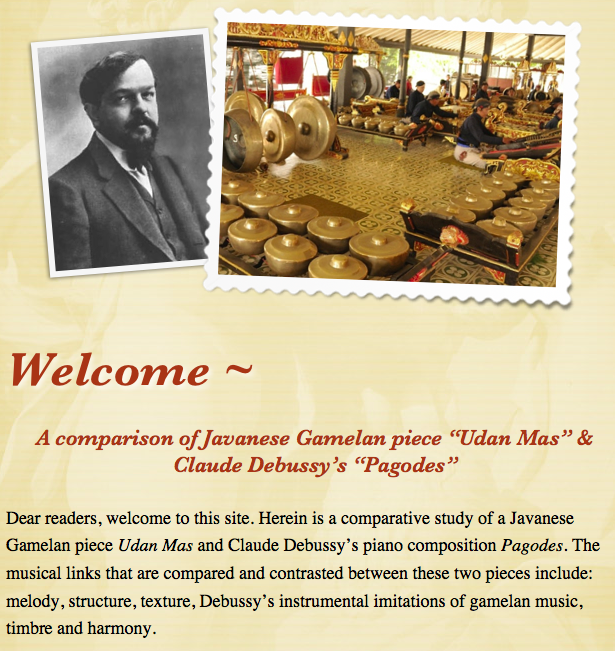 
French Impressionist composer, Claude Debussy, was fascinated by gamelan music which later inspired him to imitate this music style in his compositions. His piano piece Pagodes is a quintessential example of a gamelan-influenced work with respect to various musical elements. (Piano Society 2011, http://bdgwayangfestival.org/particle_claude.html)

This investigation compares a piano piece by Claude Debussy, and a piece from the popular music genre from Indonesia – Javanese Gamelan.
Impressionism and Indonesian gamelan are evidently two distinguishable cultures: the former is originated from Western Art Music whereas the latter is Non-Western music.

Impressionist music is a movement in Western Art Music began in the late 19th century and continued to mid-20th century. (Tsai, S, http://www.tcd.ie/Music/JF%20History/debussy.html)

The notion of impressionism is to create descriptive impressions that are not necessarily clearly depicted. Music is composed with vague vision in order to create an atmospheric effect. (Tsai, S, http://www.tcd.ie/Music/JF%20History/debussy.html)
The timbre of the music is created through exotic scale systems namely the pentatonic scale influenced by Asian music. Impressionist’s use of harmony was different to the traditional style in Western Art Music, that is, chords are used to set the mood of the piece rather than building up and releasing tension. (McGraw 1998, http://www.mhhe.com/socscience/music/kamien/student/olc/29.htm) 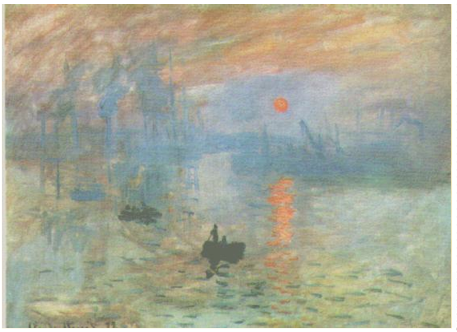 This is an impressionist painting by Claude Monet, it gave rise to the Impressionist movement.

Gamelan has an old and enigmatic origin. The earliest evidences of gamelan instruments are a series of stone carvings in the Borobudur Buddhist temple in Central Java around 800A.D. (Hock 2010, http://www.indonesiaphoto.com/facts/life/item/210-the-history-of-gamelan) 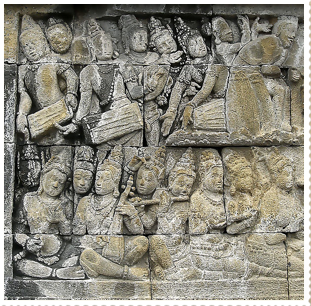 There are several styles of gamelan, the most popular being Balinese and Javanese gamelan. Gamelan ensembles are usually percussion-orientated (membranophones), along with an extensive use of idiophones, contributing to the resonant timbre in its music. There are also uses of bamboo flutes (aerophones), bowed and plucked strings (chordophones) and vocals. This music culture has been passed down by oral tradition over thousands of years in Indonesia. (Nettl, Capwell, Wong, Turino, Bohlman, Rommen 2008, Excursions in World Music, pg. 162) 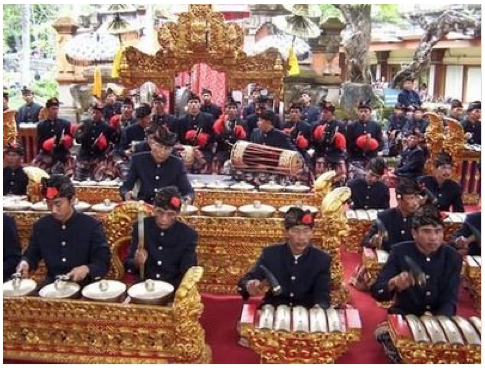 Debussy was exposed to Javanese gamelan music in 1889 Paris Exposition Universelle. Since then, his works display influences from gamelan music. Pagodes is his piano composition that demonstrates influences from Javanese gamelan music. It shares characteristics such as the polyphonic texture, resonant timbre and pentatonic tonality that emphasize the oriental atmosphere. This investigation compares Pagodes with a Javanese gamelan piece Udan Mas. A pagoda is a tall tower with multiple eves, common in many parts of Asia. Most pagodas are for religious and worship purposes. This immediately shows a relationship between Pagodes and Asian features. Moreover, the contour of the first two bars of Pagodes suggests the rooflines of pagodas. (Vanderburg.K.D, 2008) 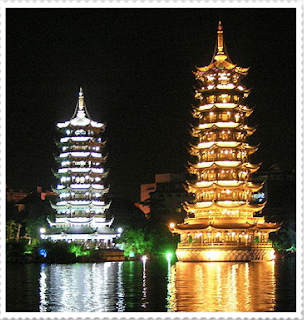 
Pagodes and Udan Mas both have a similarity in regards to the use of ostinatos and motifs. Debussy has employed an extensive amount of motifs in Pagodes. Ostinato is commonly used for all gamelan pieces. Typically, a series of melodic patterns is repeated for several times with slight variations. In Udan Mas, a group of metallophones present the melodic idea while elaborating instruments provide variations on top; the large gong punctuates the start and end of an ostinato pattern.

Figure 1.1 shows the major ostinato in Pagodes, it is written to reproduce a mellow, resonant gamelan sound. This sound is imitated by the use of pedal and the balmy, flowing melody. There are several other motifs present in the piece. For instance, the two conjunct notes (C#, D#) motif shown in Figure 1.2 is present throughout the piece, alternating between different voices on the piano, hence giving the effect that the voices are “conversing”. This is similar to the notion that the two ostinatos in Udan Mas are composed with resembling notes that also gives the impression of call-and-response. Moreover, this static “two-notes motif” creates a sense of resonance that relates to the nature of gamelan music, namely Udan Mas.

Figure 1.3 a transcription on the core melody of Udan Mas, however since gamelan music has a different scale/tuning system, these notes are of an approximations when transcribed to the Western scale system. 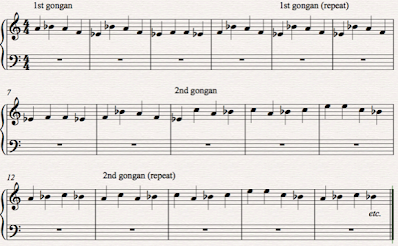 However the difference is that Pagodes has a much wider range – Udan Mas’s main melody is limited to only five notes. Also Debussy has applied a more complex use of ostinatos and motifs embedded in different voices along with interweaving counter-melodies and accompaniments whereas ostinatos in Udan Mas are presented clearly solely on the same instrument.

Counter-melody
On the other hand, both pieces are filled with counter-melodies. For example, Figure 1.4 shows Pagodes mm.7, showing an ostinato played on the treble against the counter-melody that is played in the tenor (circled) 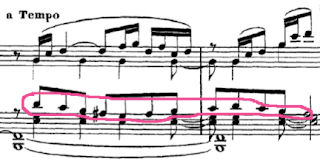 Figure 1.5 is another counter-melody played on the tenor in mm.13; it is played against a series of pentatonic scales on the treble, which is suggestive of gamelan music with its slendro and pelog scale system. 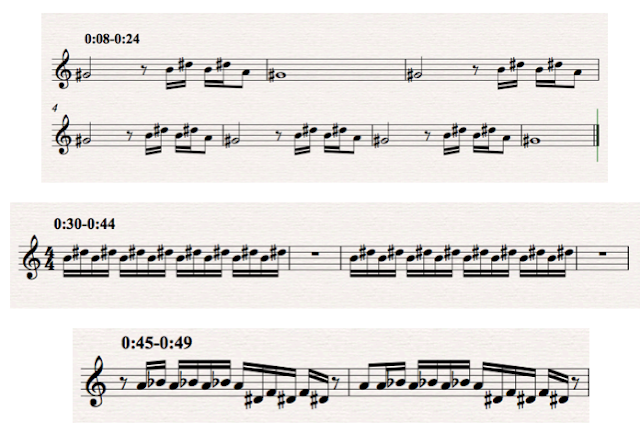 These three counter-melodies in Udan Mas are composed within a narrow range, particularly the one from 0:30-0:44 seconds – made up of repetitions of rough third intervals – provides a shimmering effect in elaborating the core melody. Both Pagodes and Udan Mas consist of counter-melodies that create polyphonic textures.

Texture
Both pieces have a polyphonic texture. One of the key elements of gamelan music is the layering of music – low instruments move slowly while higher register instruments move in a relatively faster speed. This feature is present in both pieces, such as the coda from Pagodes: 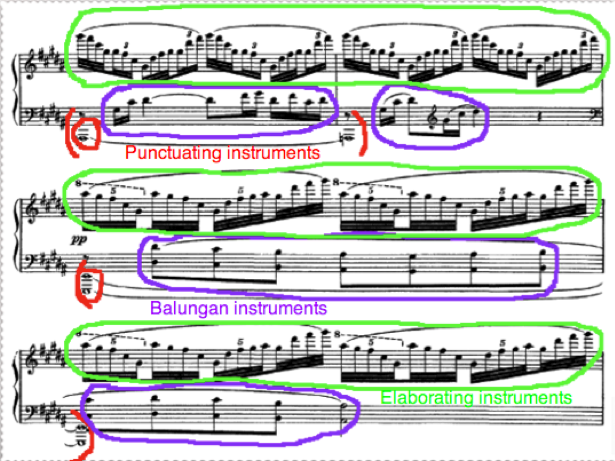 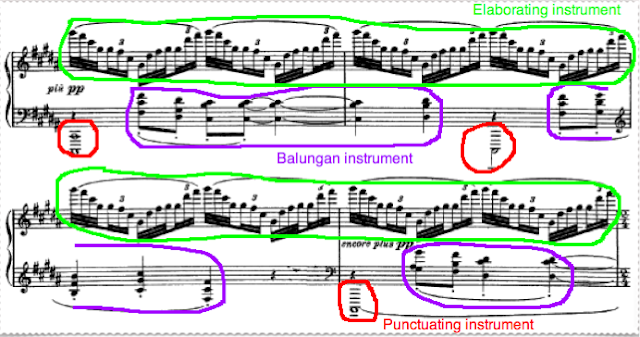 Figure 2.2: this shows another example of polyphonic texture from Pagodes.

This layering technique is also present in Udan Mas:

Use of gong in introduction


The introduction of Pagodes and Udan Mas are similar with respect to the use of gong ageng that strikes on the first beat to punctuate the music. In Pagodes, the role of gong ageng is expressed by the pedaled bass chord. It creates a resonant timbre that relates to the opening of Udan Mas, punctuated by the deep-sounding, resonant gong ageng.

In comparison, both pieces begin with an introduction when the gongs (or pedaled bass chord) are struck on the first beat. Overall, the appearances of themes and their repeats are very similar in both pieces. The repeats are minor variations on the theme; for example, in Pagodes, when the ostinato repeats, a countermelody is added; whereas in Udan Mas, during the 1st gongan return, the elaborating instruments play in a slightly varying rhythm. Pagodes has an episodic structure, which is similar to the gongans (cycles) in Udan Mas. The coda of Pagodes (starts from mm.80) is written in demi-semiquavers on the treble, hence driving the tempo of the piece. Then, it slows down at mm.97 to end the piece. This is similar to Udan Mas, in which the piece starts to accelerate just before the coda at 1:17 seconds, then slows down at 1:39 seconds to finish off. However, when analyzing more in depth, Pagodes has a more elaborate structure with its contrasting sections, sub-sections and transitions.

Pagodes presents a resonant timbre with the constant use of sustained pedal that mimics the sound of gongs. Here are a few examples of imitations on gamelan instruments.

Figure 4.1: pedaled bass chord imitation of the gong ageng strike. The chords on the treble imitates the metallic xylophones with the clashing F#-G# chord.

Figure 4.2: These high notes represent the wispy bamboo flute from a gamelan ensemble that is absent from Udan Mas.

These series of high-pitched trills create a ringing, shimmering tone which is a reminiscence of the rapid third intervals from Udan Mas at 0:30-0:44 seconds.

Difference
Pagodes has a far more complex structure than Udan Mas. Each section in Pagodes is further divided into sub-sections, and the piece also includes a bridge and transition. On the other hand, Udan Mas only contains two simple gongans with their repeats, because gamelan music is characterized by a colotomic structure (cycles), in which sections are generally repeated for several times with slight modifications.

The mood of these two pieces is also a distinct difference between them. Pagodes has a dreamy, vague timbre whereas Udan Mas has a strong metallic timbre as gamelan ensemble is mainly composed of idiophones.

Even though Debussy has included several pentatonic scales in Pagodes (e.g. mm. 11, 13, 14) to emphasize its oriental flavour, this piece is composed for the piano, thus the scale/tuning system is completely different to the slendro or pelog system in the gamelan music. Udan Mas cannot be accurately transcribed onto the Western scale system, because the note intervals are not equal tempered tones or semitones.

This musical investigation is a great opportunity for me to learn about pieces from two very distinct musical cultures: Impressionism from Western Art Music and Indonesian Javanese Gamelan from Non-Western Music.

Pagodes and Udan Mas share number of musical links such as the use of ostinatos/motifs, counter-melodies, polyphonic texture, overall structure and instrumental imitations. Nevertheless, these two culturally contrasting pieces have dissimilarities, particular the difference in Western and Non-Western scale system. Moreover, these two pieces present contrasting tone colours; for instance, Pagodes possesses the typical characteristic of an Impressionist piece with a vague, dreamy timbre whereas Udan Mas is more vibrant and metallic with the extensive use of idiophones and metallophones.
This investigation has allowed me to learn that several of Debussy’s compositions were written under the influences of Asian music, particularly Javanese gamelan music. I have always been limited within the boundaries of classical music, but through this valuable study, I have explored beyond the realms of Western Art Music and made connections between two seemingly distinctive musical cultures.